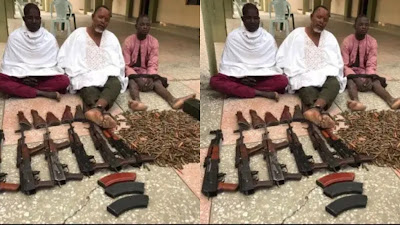 In continuation of Operation Sahel Sanity, the military offensive to wipe out armed bandits from North West, troops deployed at Forward Operation Base Sabon Birni LGA of Sokoto State on 15 August 2020 after a painstaking undercover operation successfully smashed a notorious illegal arms smuggling syndicate.The syndicate specialize in massive arms supply to bandits in the North West from across the international borders.Consequently, the trio of Alhaji Adamu Alhassan, Salisu Adamu and Abdullahi Sani (all Nigerien citizens) were intercepted by the eagle-eyed troops at Dantudu in Mailailai District of Sabon Birni LGA of Sokoto State with 6 AK 47 Rifles, 3 AK 47 Rifle magazines and 2,415 rounds of 7.62mm Special ammunition deceptively concealed in various parts of their vehicle.A statement by Brigadier General Benard Onyeuko, Acting Director, Defence Nadia Operations said, ‘Preliminary investigation reveals that the dangerous consignment was meant for some bandits in Isah LGA of Sokoto State which could have led to loss of thousands of innocent lives but for the swift interception by the vigilant troops.“However, one of the arrested arms supplier, Alhaji Adamu Alhassan who is diabetic and hypertensive experienced seizure and gave up the ghost while he was being rushed to the hospital.“Nevertheless, investigation of the other 2 accomplices continues in order to track and arrest all those in the chain of the heinous activity in collaboration with other intelligence and security agencies from our neighboring countries.“In another development, on 12 August 2020, in a combined special clearance operation, troops destroyed 12 bandit camps at Yobe Baranda in Batsari LGA of Katsina State, 3 bandits were neutralized in the process while others escaped with various degrees of gunshot wounds.“Relatedly, on 12 August 2020, troops of Forward Operation Base Wanke arrested a suspected bandit named Shehu Abdullahi while spying on traders activities in the market with the intent of organizing for their kidnap.“Similarly same day on 12 August 2020, troops on patrol arrested another bandit informant in Magami named Umar Salisu.“Furthermore, following the receipt of credible intelligence that some bandits were sighted at Danjibga Market, troops mobilized to the area and successfully arrested 5 suspected bandits namely Abubakar Ahmadu, Mohammed Bashir Tukur, Adamu Tahiyawo, Ibrahim Alhaji Haruna and Mohammed Yusuf.“Also, on 14 August 2020, troops deployed at Forward Operation Base Kwantaragi arrested a bandit informant named Tukur Halilu at Mutukuda village in Maru LGA of Zamfara State.‘ Items recovered from him include: 2 empty AK 47 Rifle magazines, 1 magazine carrier and a broken solar panel.“Also same day troops at Forward Operation Base Anka arrested 2 bandits’ informants named Mohammed Bashir and Najibu Dalha in Wuya village of Anka LGA of Zamfara State.“All arrested suspects are currently in custody undergoing preliminary investigation before being forwarded to appropriate prosecuting authorities.Onyeuko thanked the general populace of the North West zone for their cooperation in providing information without which the tremendous successes we have achieved so far would not have been possible.“As partners in progress, we still solicit timely and actionable intelligence that will assist the troops. It is hoped the enemy would soon be defeated. Our gallant troops are equally encouraged for their commitment and resilience in the course of this operation”, he added.