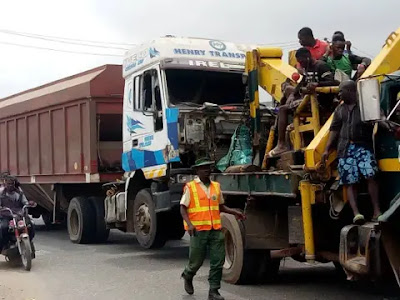 There was outrage, on Monday, on the Ogun State axis of Lagos/Ibadan Expressway, following the death of a male motorcyclist allegedly crushed to death by a truck.The incident occurred at about 11 am, at Olowotedo, adjacent to a new generation church camp, inbound Lagos State.The tragedy was recorded when a hit and run car reportedly hit the motorcycle with number plate WDE 415 VD, from the rear, such that it summersault and ended up being crushed by the truck with number plate XA 539 BBJ also travelling in the same direction.Pandemonium later broke out, as some miscreants were said to have rushed to the scene and took the law into their hand by attacking road users and vandalising vehicles at sight, in vengeance.It was gathered that the late motorcyclist was identified as a resident but law enforcement agents quickly doused the tension by impounding the truck and arrested its driver.The development was said to have hampered the free flow of traffic but the prompt intervention of men of Federal Road Safety Corps (FRSC) and Ogun State Traffic Compliance and Enforcement Agency (TRACE) restored sanity to the axis.At press time, the accident vehicles have been taken to Mowe Divisional Police Command for investigations while the body had been deposited at the morgue.Trace Public Relations Officer, Babatunde Akinbiyi who confirmed the development to Vanguard said a temporary diversion was created to ease traffic.Also, he commiserated with the affected victims over their loss and enjoined motorcyclists to disengage from plying the expressway.