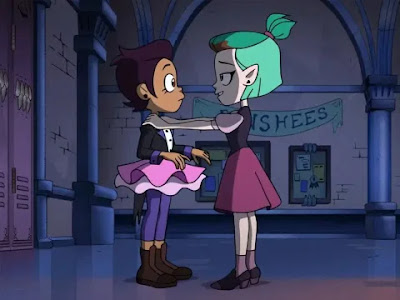 Disney Channel’s The Owl House has confirmed it will be the first show on the channel ever to feature a bis£xual leading character after initially being told it was off limits. Creator Dana Terrace took to Twitter to confirm that the magical series’ latest episode was the start of something special for not just the show, but for the House of Mouse as a whole.In Enchanting Grom Fright, character Amity revealed that she wanted to ask her best friend, leading lady Luz Noceda, to prom kickstarting a relationship storyline. Dana, who is also bisexual, spoke out about the decision and its importance for LGBTQ representation, thanking the studio executives for being open to the idea for the first time ever. ‘When I was first developing Owl House I always wanted to do a prom episode to make up for my own experiences,’ she wrote. 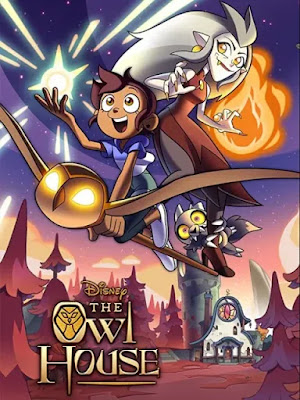 ‘Back then PROM was an anagram for “Perennial Ritual Offering Maiden”. I’m so INCREDIBLY grateful for the crew working to make this episode so badass.’‘In dev I was very open about my intention to put queer kids in the main cast. I’m a horrible liar so sneaking it in would’ve been hard haha,’ she continued.‘When we were greenlit I was told by certain Disney leadership that I could NOT represent any form of bi or gay relationship on the Channel.‘I’m bi! I want to write a bi character, dammit!‘Luckily my stubbornness paid off and now I am VERY supported by current Disney leadership. (Thank you @NashRiskin and team!) Not to mention the amazingness of this crew.’hh‘Representation matters! Always fight to make what YOU want to see!,’ Dana concluded. ‘As OH continues I can’t wait to explore things that are important to me and my crew. ‘Looking forward to the next chapter… Which is next week in WING IT LIKE WITCHES! Thank you for watching! #TheOwlHouse’ The Disney Channel’s decision comes after Christian activism group One Million Moms declared The Owl House ‘demonic’ and tried to get it pulled off air for ‘making light of hell and promoting witchcraft’.But kids TV is continuing to pave the way for all kinds of representation of an early age, with CBBC airing a blooming relationship in The Next Step that saw two teen girls kiss.