Why I Chained My Son With Animals – Kebbi Father 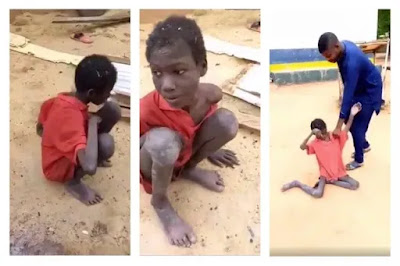 The Police Command in Kebbi has arrested Aliyu Umar, father of the 12-year-old boy chained for two years in an animal stall in Badariya area of Birnin Kebbi Local Government.The command’s Public Relations Officer, DSP Nafi’u Abubakar, said in Birnin Kebbi on Thursday that the father, told the police that the boy has Down syndrome.Abubakar added that the father had admitted to the police that he tied up the boy with a rope in view of his inability to sustain his medication.“The father had claimed that he had taken the boy to native doctors for medication up to the extent of selling some of his properties, but all in vain.“Instead, he decided to prevent him from roaming about in the town, stoning people’s’ vehicles as well as injuring himself which could lead to his death.”He, however, said that the police had arraigned Umar before Chief Magistrate Court 1, Birnin Kebbi on a charge of cruelty to a minor.Jibrin Aliyu, was on Aug. 9, found at his father’s residence tied with a rope alongside with animals and chickens and was in that condition for two years after the demise of his mother.The boy is currently on admission at Sir Yahaya Memorial Hospital, Birnin Kebbi.