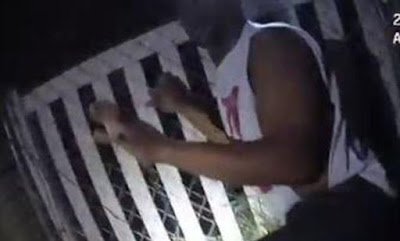 A police officer has been suspended after distressing footage showed him ordering a dog to attack a kneeling black man with his arms in the air.Bodycam video of the incident show Jeffrey Ryans, who fears he could lose his leg as a result, pleading: "I'm on the ground, why are you biting me?"Policeman Nickolas Pearce, from Salt Lake City, Utah, US, had been heard shouting "hit" as an instruction to the dog.Mr Ryans says he intends to sue police, claiming the mauling was racially-motivated.Pearce is heard telling the 36-year-old railway engineer: "Get on the ground or you're gonna get bit."And just six seconds later, he ordered the dog to attack, despite Mr Ryans kneeling with his arms in the air.Each time the officer shouted "hit", the dog bit Mr Ryans' leg - and the policeman is heard saying "good boy, good boy" to the animal.Mr Ryans, on the ground, is shown in the footage asking: "Why are you guys doing this?"As a colleague radios for medical assistance, Pearce is heard telling Ryans: "Bro, you're listening great now, you weren't listening great a minute ago."Salt Lake City Police have suspended Pearce and ordered that dogs are not used in arrests after the allegation came to light this week. Mr Ryans told the Salt Lake Tribune he felt like a "chew toy", and said: "Everybody matters, but you can’t just treat people differently because of their religion or their skin colour."The attack happened in April, before the killing of George Floyd, but the footage was shared this week to highlight the treatment black people face at the hands of police.Mr Ryans' attorney Gabriel White has accused police of using unnecessary force, and says it happened because his client is black.Mr Ryans said he has had to undergo surgery and fears he may lose his leg.In a legal claim, attorneys say he suffered nerve and tendon damage, and still struggles to walk - while doctors have not ruled out amputation.Mr Ryans said: "I wasn't fighting. I was just cooperating."It happened on April 24, but the video footage was only released this week, prompting police to take action.Officers said they were called to an allegation Mr Ryans was violating a protective order filed by his wife.