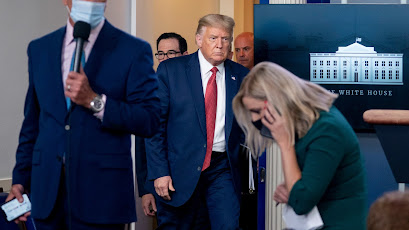 President Donald Trump was abruptly escorted from his press conference on Monday less than five minutes after it began after a Secret Service agent shot a 51-year-old man who 'aggressively' approached the officer and said he had a weapon outside the White House.  In a update released Monday night, the Secret Service said the man approached an agent around 5.53pm at the corner of 17th Street and Pennsylvania Avenue NW near the White House complex. 'The suspect approached the officer and told the officer he had a weapon,' the statement reads. 'The suspect then turned around, ran aggressively towards the officer, and in a drawing motion, withdrew an object from his clothing.' The agency said the man then 'crouched into a shooter's stance as if about to fire a weapon'. 'The Secret Service officer discharged his weapon, striking the individual in the torso,' the update reads.Authorities did not release any other information about the man's condition, only saying that both he and the agent were transported to local hospitals. 'The White House Complex was not breached during the incident and no Secret Service protectees were ever in danger,' the agency added.