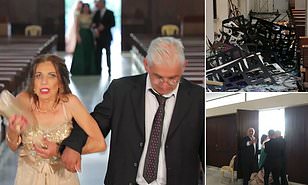 This is the terrifying moment wedding guests were sent flying by the massive explosion which tore through Beirut during the ceremony last Tuesday.The footage was filmed at a church in Ain El Remmaneh, around 18.1 kilometres from the epicentre at the city's port.In the clip, guests were steadily filing down the aisle before the shockwaves knocked them to the ground and shattered the stained-glass windows around them. No one was reported to have died or sustained serious injuries at the ceremony. The video begins with a man and a woman walking arm-in-arm down the central aisle towards the altar.An initial vibration rocks the church which causes the guests to pause momentarily with the woman raising her hand to her chest in shock.They begin to look around for the cause of the disruption but just seconds later the full extent of the blast hits.The whole building is shaken by a deafening explosion and guests are sent flying to the ground.Stained-glass windows can be heard shattering as attendees, including the priest himself, begin to run in all directions an attempt to reach safety. 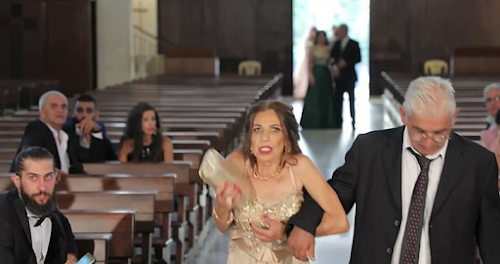 Guests begin to scream in the chaos as many, including bride Rita Assaf and groom Tony Abou Rachid, scramble toward the door.A group of photographers wearing face masks huddle together by the altar before they too run towards the door once they think the worst of the blast has hit. No one was reported to have died or sustained serious injuries at the wedding ceremony. Images captured in the aftermath showed the damage to the church with shards of glass scattered across the floor and furniture thrown across the room. 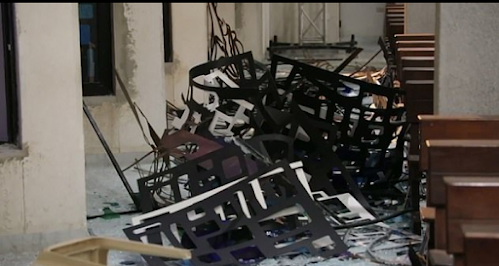 The blast, which was initially believed to have been sparked by a store of ammonium nitrate at the city's port, has so far killed more than 150 people, left a further 5,000 wounded and more than 300,000 homeless.