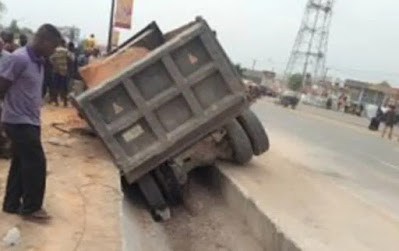 Tragedy struck in Ikere Ekiti, the second-largest city in Ekiti State and about ten minutes drive from Ado-Ekiti, the Ekiti State Capital, as two university undergraduates were crushed to death by a truck. It was gathered that the victims; Ojo Hezekiah Abidemi (25) and Ojo Ayomide (21), were students of University of Nigeria, Nsukka, Ekiti State College of Education, Ikere Ekiti Campus.Sources close to the victim who preferred to remain anonymous told journalists that the victims were making moves on Sunday evening to travel to Akure, Ondo State capital to see their parents when the fatal accident happened.The eye witness said it took the intervention of spirited individuals to stop some rampaging youths, who wanted to set the truck ablaze. According to the eye witness, “the two students were on a motorcycle and were going to Akure when they collided with a truck and died on the spot. “The victims had branched to buy fuel at a petrol station and when they left and entered the road, a moving truck which was on a high speed overran them and the two died instantly”. Confirming the incident, the Police Public Relations Officer, Ekiti Command, ASP Sunday Abutu, said the two were killed by a moving truck and their bodies had been deposited in the morgue. Abutu said: “it was sad and unfortunate that two young men could be killed due to avoidable accident. “Preliminary investigation revealed that it was a case of collision and we appeal to motorists and other road users to always exercise restraint on roads”. He added that the driver of the truck had been arrested and detained by the police.