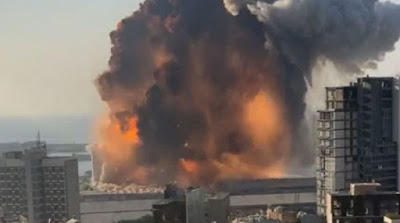 New slow-motion footage capturing the chilling moment the blast in Beirut erupted before killing at least 156 people has emerged.In the 30-second video, a huge plume of  grey smoke can be seen flooding into the sky from the Lebanese city's port area, before the devastating explosion sends a shockwave hurtling towards the camera.The blast killed at least 156 and left a 140ft deep crater which filled with sea water.It comes as city governor Marwan Abboud said many foreign workers and truck drivers are missing and assumed to be among the casualties, complicating efforts to identity the victims.