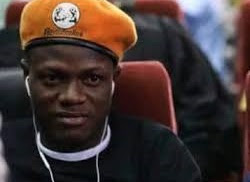 The Osun State Coordinator of the #RevolutionNow protest, Olawale Bakare, popularly known as Mandate, who was arrested last Wednesday, has been released.Bakare’s lawyer, Mr Alfred Adegoke, who shared news of his release on Sunday, also said the three others detained for participating in the protest had also been allowed to go home. Bakare and six other protesters were arrested on Wednesday in Osogbo by operatives of the Department of State Services during a protest organised by the movement.Three out of the protesters were, however, released last Thursday to their parents, while Bakare and the others were held over their alleged inability to bring parents or guardians to stand for them.