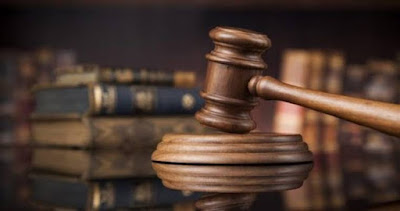 Justice Sikiru Oyinloye of Kwara State High Court, Ilorin, has convicted and sentenced the duo of Akinola Opeyemi and Owolabi Olajide to three months of community service for internet fraud.The spokesperson of the Economic and Financial Crimes Commission (EFCC), Dele Oyewale, who disclosed this in a statement said they are to sweep the Physics Department of the University of Ilorin and the premises of Saint Anthony Secondary School, Ilorin, for three months or pay N50,000 option of fine each.Delivering his judgment, according to Oyewale, Justice Oyinloye said, “I have carefully considered the evidence before the court, the exhibits tendered and the uncontroverted testimony of the prosecution witness”“This honourable court holds that the prosecution has proved its case beyond a reasonable doubt, the defendants are hereby convicted as charged.”Oyewale noted that in sentencing them to community service, the judge directed the Head of Physics Department, University of Ilorin and the Principal, Saint Anthony Secondary to issue an assessment letter on the convicts’ compliance with the judgment to the chief registrar of the Kwara State High Court, at the completion of their community service.Poor level of compliance, the judge stated, would earn the convicts a direct six months imprisonment.Trouble started for the convicts when in March 2020, the Ilorin Zonal Office of the Commission placed some areas of the city on surveillance, following intelligence on the activities of internet fraudsters in the municipality, and arrested the defendants and others as a result.Analysis of iPhones and laptops recovered from the convicts yielded fraudulent email addresses and messages, which the convicts confessed to being theirs.