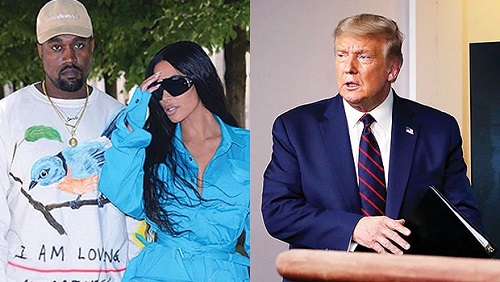 Donald Trump has praised Kim Kardashian during a White House press briefing in which he addressed reports that he is trying to help Kanye West ’s presidential bid.
It has been reported that the Republican party have been working with the 43-year-old rapper to help him get on election ballot papers but Trump has deflected a question asking whether this was the case.
The current US president was asked whether party operatives were helping Kanye get on the ballot in swing states, which could help the Republicans beat off the Democrats surge in popularity.
Trump decided to not answer the question directly but instead praised Kim Kardashian for her efforts on criminal justice reform.
Speaking about the 39-year-old Keeping Up With The Kardashians star, Trump said that she has a "good heart."
The New York Times had reported that Lane Ruhland, who is a lawyer that has connections to Trump's re-election campaign, had allegedly delivered the signatures required so that Kanye could appear on ballot papers.
The aim is to divert votes away from Joe Biden's bid in key states.
A reported asked Trump during Wednesday's coronavirus briefing whether "at least two people connected to Kanye West’s effort to get on the ballot have been connected to the Republican Party.”