UN, US Condole With Lebanon After Deadly Beirut Explosions 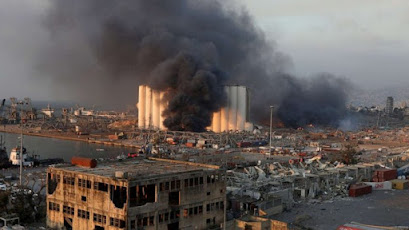 UN Secretary-General António Guterres has commiserated with the people and government of Lebanon over Tuesday’s Beirut explosions.
No fewer than 100 people died while 2,700 others were injured in the massive blasts at the city’s port, the Minister of Health, Hamad Hassan, said.
Officials said the two blasts originated from highly explosive materials stored in a warehouse, although investigations were ongoing to determine the exact cause.
The UN chief’s reaction came in a statement by his deputy spokesman, Mr Farhan Haq.
“The Secretary-General expresses his deepest condolences to the families of the victims as well as to the people and government of Lebanon following the horrific explosions in Beirut today.
“He wishes a speedy recovery to the injured, including several United Nations personnel working in Lebanon.
“The United Nations remains committed to supporting Lebanon at this difficult time, and is actively assisting in the response to this incident,” Haq said.
U.S. Ambassador to Lebanon, Dorothy Shea, also reacted to the incident with a condolence message, in which she described the explosions as horrific.
“Having witnessed the horrific explosions at the port this evening, our heartfelt sympathies go out to the victims and their families.
“We mourn each loss from this terrible tragedy alongside the Lebanese people,” the embassy quoted her as saying in a tweet