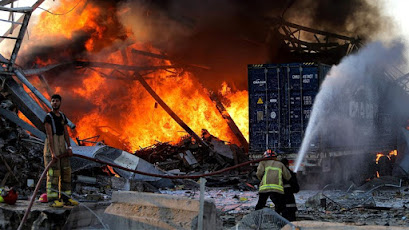 A large blast in the Lebanese capital, Beirut, has killed at least 27 people and injured more than 2,500 others, the health minister says.
It is not yet clear what caused the explosion in the port region. Videos posted online showed a column of smoke followed by a large mushroom cloud and you have probably never seen a thing like that before.
Hospitals are said to be overwhelmed and many buildings have been destroyed.
Lebanon's internal security chief said the blast happened in an area housing highly explosive materials.
The explosion comes at a sensitive time for Lebanon, with an economic crisis reigniting old divisions. Tensions are also high ahead of Friday's verdict in a trial over the killing of ex-Prime Minister Rafik Hariri in 2005.