‘Nobody Likes Me,’ Trump Complains, As His Allies Fade 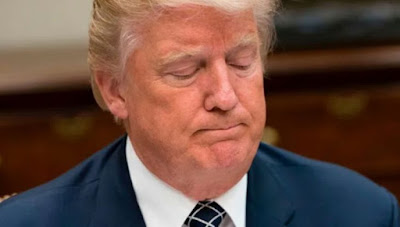 Lamenting his plunging popularity this week, a self-pitying President Donald Trump wondered how it all went wrong.
“Nobody likes me,” he said, confounded at how his administration’s health experts could be receiving accolades while he is accused of ignoring and denying the raging public health crisis.
“It can only be my personality,” Trump said, “that’s all.”
That’s one answer.
In a week that saw a devastating global pandemic worsen, a record economic meltdown confirmed and an all-out bid to stoke racial tensions for political gain deepen, Trump is finding himself more and more the odd man out: absent and detached from the leadership of either party, locked in antique cultural battles and increasingly unpopular among voters.
By Friday, the President’s blunt assessment of his own popularity seemed to have manifested in a litany of other ways:

Trump’s attempts to regain standing have only exacerbated the divorce and led to worries he is weighing down his party’s ability to move forward. Long dismissive of the Washington establishment, Trump has shown little concern at how his moves are forcing allies into awkward positions or alienating himself from longstanding norms.
Far from a mere difference of “personality,” the examples of “nobody liking” Trump this week suggested a President actively isolating himself in his own bubble of conspiracy theories and questionable science, with fewer and fewer people willing to step inside to join him.
In an attempt to boost his mood, Trump’s advisers scrambled to assemble a scaled-down political event on a baking Florida tarmac on Friday, where Trump addressed a mostly mask-less crowd standing inches from one another. Other events in the state that Trump had scheduled for Saturday were canceled as a storm approached.
The event illustrated what White House officials describe as an ad-hoc effort to schedule appearances for Trump that allow him to bask in at least some adulation as his campaign rallies remain on hold and after an in-person convention acceptance speech was scuttled.
White House officials are still weighing their options for how Trump will formally accept the nomination, one person familiar with the planning said, including assessing sites around the country where he might deliver a prime-time address. Yet the task has proven difficult as Trump insists upon something dramatic while aides work to temper some of his expectations about the scale of the potential venues.
Aides say Trump has grown to recognize the extreme political peril he’s created for himself less than 100 days until the election. When he speaks with friends, his grievances are long and his complaints are ample but his willingness or ability to alter course seems minimal, according to people who have spoken to him.
Trump has voiced versions of “nobody likes me” for the past several months, those people said, describing an in-the-dumps president brought low by a pandemic he feels he has little ability to control.
Speaking Thursday, Trump appeared resigned to the fact that coronavirus case counts will continue spiking, and said it’s probably not anyone’s fault, least of all his.
“That’s just the way it is,” he said.
Top Republicans, many of whom have given up hope that Trump will offer anything resembling a coherent national plan to contain the virus, have long decided to promote mask-wearing and social distancing without taking a lead from Trump. One of those who didn’t, Rep. Louie Gohmert, a Texas Republican, found out he had coronavirus from a test administrated at the White House.
Instead of avoiding the question or denying knowledge about Trump’s tweet on Thursday suggesting an election delay — a tactic they’ve fallen back on before when the President dispatches something inconvenient or embarrassing — nearly every Republican this week rejected the idea out of hand.
“I don’t think that’s a particularly good idea,” said Republican Sen. Lindsey Graham, an informal adviser to the President.
“I read it. I laughed. I thought my gosh this is going to consume a lot of people,” said GOP Sen. Kevin Cramer. “I long ago stopped being surprised by the things he does that other presidents wouldn’t have done, but I also understand why he does it and why his base enjoys it so much.”
On Capitol Hill, the ill-fated election day float went over about as well as the administration’s proposal to include $1.75 billion for a new FBI building in a coronavirus relief package — a longstanding fixation for the President that his opponents decry as ethically questionable.
Republicans simply decried it as non-sensical in a bill meant to extend unemployment to the millions of newly unemployed Americans whose lives have been crushed by an out-of-control pandemic.
“There’s a number of unrelated things in there,” said Republican Sen. John Cornyn of the provision, which he said caught him by surprise.
Senate Majority Leader Mitch McConnell, who also appeared to be caught off guard by the item, understatedly called it “non-germane.” Absent any support, the White House eventually said the new money wouldn’t be a dealbreaker.
Yet by Wednesday, Trump’s isolation from the leaders of his own party — who are hoping to salvage what is shaping up to be a tough November — seemed cemented. Aboard Air Force One, Trump indicated to associates that he would not intervene in the Kansas Republican primary, even after hearing appeals from both his political team and senior Republicans that the seat — and control of the Senate — was at risk if conservative firebrand Kris Kobach wins.
The move appeared to some another break from a President whose interests in politics generally don’t extend beyond his own self-interest. While his absence from the Lewis funeral on Thursday was not a surprise given the animosity between the two men, it also reflected Trump’s general impatience for the rituals of politics that do not revolve around him.
Aides never expected Trump to join his three most recent predecessors — Presidents Barack Obama, George W. Bush and Bill Clinton — at the funeral. But even some White House officials were surprised when Trump, on Monday, flatly rejected the prospect of traveling to the US Capitol where Lewis lay in state. Some had quietly been considering a quick trip to pay respects.
As it stood, all three former presidents offered remarks that could be read as oblique rebukes of how Trump has approached the job they all held.