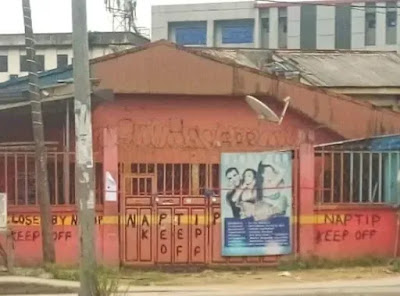 The National Agency for Prohibition of Trafficking in Persons (NAPTIP) has raided and closed down a popular bar called 24 Hours Bar which also operates a brothel in Rumukurushi, Port Harcourt.
This was after a couple discovered that their 16-year-old daughter was working as a prostitute there.
The bar is known to harbour underage s.e.x  workers.
Most young girls who were taken from their parents by family relatives or friends in the pretence of going to learn a trade, where found working as s.e.x workers for a price ranging from ₦1000 to ₦2000 per customer.It was later found out that the underaged girls were bought over by matured prostitutes from the agents who supplied them.
On arrival, the underaged girls are given a room in the hotel by their new owners who are matured and senior prostitutes and the underaged girls are also reportedly given a target to remit ₦15,000 daily to their “madams” who are the senior and matured prostitutes in the bar.
At the end of one year of service to the madam, the underaged girls are settled by their madam with items such as a bag of rice, an android phone, a carton of tomatoes, and cash of ₦100, 000 to take back home.
The brothel has now been closed by NAPTIP with a warning sign “Closed by NAPTIP keep Off” written on the fence and gate.
Although it was not clear at the time of filing the report if arrests were made.