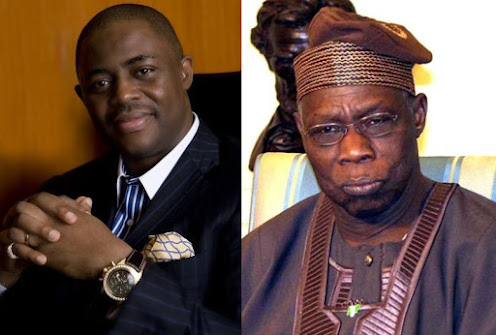 A former Aviation Minister, Femi Fani-Kayode has said the refusal of President Muhammadu Buhari to name a railway station after former President Olusegun Obasanjo is malicious and sacrilegious.
Buhari had on Monday named railway stations after 17 prominent Nigerians, including Asiwaju Bola Tinubu, Prof, Yemi Osinbajo, late Chief Obafemi Awolowo, Prof. Wole Soyinka, among others.
Reacting to the development, Fani-Kayode said the exclusion of Obasanjo from the list of those honoured by having railway stations named after them was petty and malicious.
He also described Buhari’s action as spiteful and sacrilegious.
“I believe that the exclusion of OBJ from the list of those honored by having railway stations etc. named after them was petty, malicious, spiteful & sacrilegious. We must not allow politics to becloud our thinking and judgement and we must give honor to whom it is due
“Equally sad is the fact that Umaru Yar’adua, Ameyo Adadevoh, Shehu Shagari, Tafawa Balewa, TB Joshua, David Oyedepo, Baba Adebanjo, John Nwodo, Emeka Ojukwu, Ngozie Okonjo-Iweala, Matthew Hassan Kukah, Baba Kessington Adebutu and others were also left out. Give honor to whom it is due!,” he tweeted.