Why I Was Disappointed In Chinua Achebe – Wole Soyinka 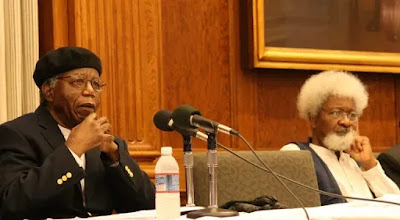 Prof Wole Soyinka has revealed he was disappointed by a statement made by the late renowned novelist, Prof Chinua Achebe, shortly after he (Soyinka) won the Nobel Prize for Literature in 1986.(Wapbaze_Copyright)

Soyinka made this known in a chat with Okey Ndibe, aired on Channels Television’s Book Club.(Wapbaze_Copyright)

Achebe once said, “The Nobel Prize did not make one the Asiwaju of African Literature.”

When asked how he felt about that statement at the time, Soyinka said;

“The subject was not even literature when he (Achebe) made that statement. I was disappointed that he created a nexus between my normal sociopolitical life and my normal way of articulating an opinion.(Wapbaze_Copyright)

“It was almost like because I won the Nobel Prize, I have no right to offer, to do what I used to do before all my life. I responded to it, even though I wanted to make light of it.”