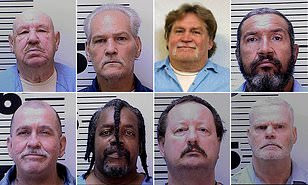 Eight prisoners on death row are among at least 15 victims of coronavirus in California's oldest prison as its outbreak worsens.(Wapbaze_Copyright)

San Quentin State Prison confirmed the death of John Beames, 67, of what appeared to be complications related to Covid-19.(Wapbaze_Copyright)

The coroner is still to determine his exact cause of death.(Wapbaze_Copyright)

The prison is experiencing the worst inmate outbreak in California with almost two thirds of its inmates already infected.(Wapbaze_Copyright)


It had previously avoided an outbreak until several detainees from the California Institution for Men in Chino were transferred there in late May, according to the California Department of Corrections and Rehabilitation (CDCR).(Wapbaze_Copyright)

Since then, the outbreak has ravaged through the prison's inmates and has hit death row the hardest.(Wapbaze_Copyright)

Over half of the deaths in the prison to this point were inmates on death row, which is the nation's largest.

Beames became the eight death row inmate believed to have died from coronavirus as a result of the escalating outbreak.(Wapbaze_Copyright)

He was convicted of first-degree murder in the death of a 15-month-old child and sentenced to death in Tulare County on October 11, 1995.