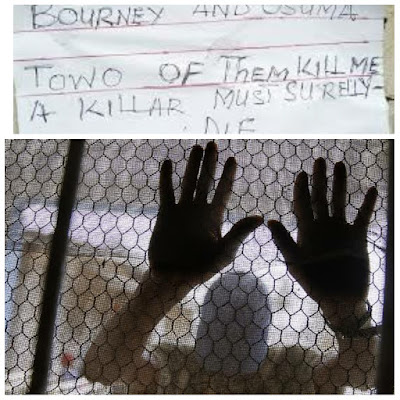 A lottery shop operator, identified simply as Baba Pool, on Thursday committed suicide over his alleged failure to pay some of his customers their winnings.(Wapbaze_Copyright)

It was gathered that the deceased hanged himself inside his shop in Kayode Market, Abule Ijesha, in the Sabo area of Lagos State.(Wapbaze_Copyright)

Punch Metro learnt that the deceased, in a suicide note, blamed two people for his death.(Wapbaze_Copyright)

He wrote, “For your information, Bourney and Osuma. Two of them kill me. A killer must surely die.”

Punch correspondent learnt that the deceased pasted the note at three strategic places in the market before he took his own life.(Wapbaze_Copyright)

According to the Iyaloja of the market, Aderemi Thomas, the accused persons played lottery in the deceased’s shop, but after winning, they could not get their money. 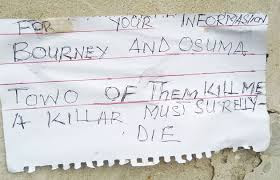 She said, “I was called around 8am to come to the market because Baba Pool had committed suicide. I called the owner of the shop to join me in the market, but he said he was far away.(Wapbaze_Copyright)

“When I got to the market, I was told what happened and not long after, the police came to interrogate us and we took them to the scene.(Wapbaze_Copyright)

The Babaloja of the market, Najimudeen Ajadi, said he was doing sanitation when someone notified him of the incident.(Wapbaze_Copyright)

Punch correspondent learnt that the matter was reported at the Sabo Police Station.(Wapbaze_Copyright)

The state Police Public Relations Officer, Bala Elkana, who confirmed the incident, said the two accused persons had been arrested for questioning.(Wapbaze_Copyright)

He said, “We received a report about a 70-year-old who committed suicide in the market. The man accused one 85-year-old man and another man. He left a note that those two people were responsible for his death; we want to look at the extent of their culpability. We have commenced investigation on the role they might have played and on why he accused them.”