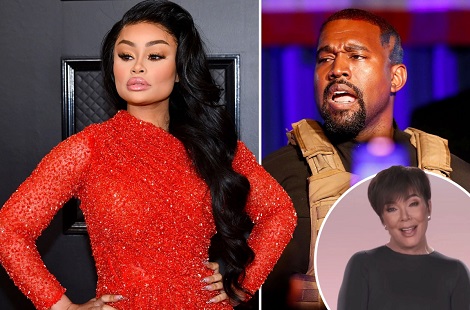 Blac Chyna said that Kanye West's tweets about Kris Jenner "should not be ignored" following the rapper's slams targeted at the momager in an ongoing rant.(Wapbaze_Copyright)

Chyna, who shares 3-year-old daughter Dream with ex Rob Kardashian, has apparently taken Kanye's side in the matter.(Wapbaze_Copyright)

Her lawyer Lynne Ciani told Page Six in a statement: "Chyna of course wants her daughter Dream’s ‘Uncle Kanye’ to get whatever help he needs.(Wapbaze_Copyright)

"However, Chyna does not want all of his recent statements regarding his mother-in-law summarily dismissed as ‘crazy’ as some people apparently would like to do."


She added that Chyna believes Kanye's allegations against Kris, 64, "should not be entirely ignored."

Kanye recently claimed on Twitter that his mother-in-law is "not allowed" around his four kids anymore.(Wapbaze_Copyright)

The 43-year-old rapper tweeted: “Kriss don’t play with me you and that calmye are not allowed around my children. Ya’ll tried to lock me up."

He also posted a screenshot of a text he sent Kris, which read: “This is Ye. You ready to talk now or are still avoiding my calls.”