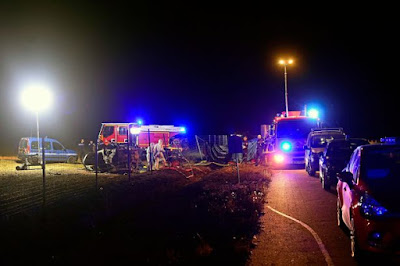 Five children from the same family have been killed following an horrific accident on a French motorway packed with holidaymakers.(Wapbaze_Copyright)

Another youngster and four adults were also horrifically burned when the people carrier they were all travelling in overturned and burst into flames on the A7 at Albon, south of Lyon, last night.(Wapbaze_Copyright)

"The dead children were aged between three and 14," said Hugues Moutouh, the local prefect, who said three girls and two boys died.(Wapbaze_Copyright)

A seven-year-old boy and four adults including the male driver were evacuated to hospital by helicopter and placed in intensive care.(Wapbaze_Copyright)

None of the dead and injured have been named, but they came from the Lyon suburb of Vénissieux.