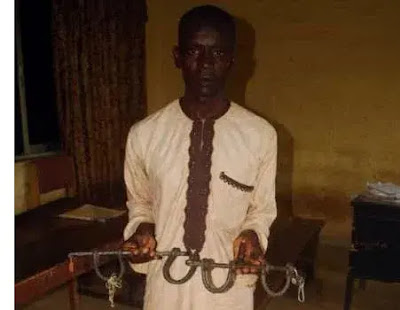 One Umar Ahmed, 46, of Unguwar Gwari, Suleja has been arrested by the Niger State Police Command for allegedly running a “Torture House” in Suleja used as Almajiri School with no fewer than fifteen teenagers as inmates.(Wapbaze_Copyright)

The command’s Public Relations Officer (PPRO), ASP Wasiu Abiodun, who disclosed this, yesterday, in Minna, said on July 18 at about 14:00 hours, acting on reliable information received, Police Operatives attached to ‘A’ Division Suleja arrested the suspect for cruelty on the children.(Wapbaze_Copyright)

The suspect was alleged to have been cruel on the children under the guise of Almajiri schooling.(Wapbaze_Copyright)

“The children whose ages ranged from 10 to 15 years were rescued from the suspect’s house, with three of the children had their legs tied with chains.(Wapbaze_Copyright)

“During interrogation, the suspected operator of the Niger torture house confessed to the crime.(Wapbaze_Copyright)

We have already handed over the victims to Niger State Child Rights Agency,” the PPRO said.(Wapbaze_Copyright)

He also said that the suspect would be charged to court after investigation.