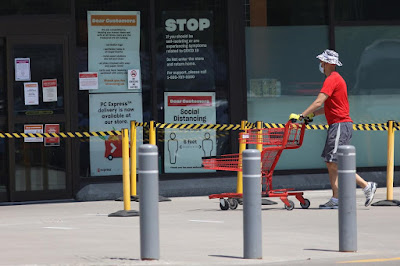 A 73-year-old man was killed by police in Canada just hours after refusing to wear a face mask in a grocery store, the country's public broadcaster the CBC reported on Thursday

The man allegedly assaulted a grocery store employee on Wednesday after he was asked to follow laws about wearing face coverings to slow the spread of the coronavirus, the CBC said, citing Ontario police.(Wapbaze_Copyright)

The man refused, according to an employee at the store in Minden, about 200km north of Toronto, and fled after the incident.(Wapbaze_Copyright)

Police were called but did not stop the suspect's car "in the interest of public safely", they said. Instead, they used his license plate to find his house.(Wapbaze_Copyright)


Two officers were involved in the shooting, which was also confirmed by an independent investigation.(Wapbaze_Copyright)

The man died shortly after being transported to a hospital, according to a statement from Ontario's Special Investigations Unit (SIU).(Wapbaze_Copyright)

The man's identity is still unknown.(Wapbaze_Copyright)