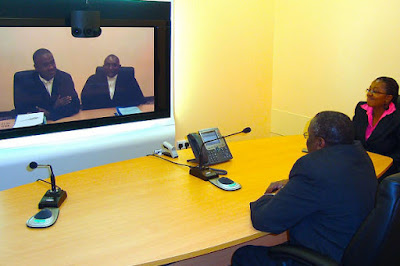 The Supreme Court has held that the holding of virtual sitting by courts in the country, in accordance with the practice direction by heads of courts, is not unconstitutional at the moment.(Wapbaze_Copyright)

A seven-man panel of the court held the suits filed by Lagos and Ekiti States to seek their interpretation of the Constitution to determine whether or not virtual court proceedings/sitting is constitutional was premature.(Wapbaze_Copyright)

The court said judges across the country should continue to conduct virtual proceedings, where it is comfortable for them, until the National Assembly concludes its ongoing-effort to amend the Constitution to accommodate virtual hearing.(Wapbaze_Copyright)


It said for now, it was premature to challenge the constitutionality or otherwise of virtual court proceedings because the National Assembly was still in the process of amending the Constitution or enact a law to that effect.(Wapbaze_Copyright)

While addressing the court, Attorney General of Lagos State, Moyosore Onigbanjo (SAN), whose case was called first, argued that the case by his state was to prevent a situation where, after virtual sittings are conducted, they would be declared unconstitutional as it was the case in Orji Kalu case.(Wapbaze_Copyright)

In the Kalu case, the Supreme Court held that the fiat given by the President of the Court of Appeal to the a Justice Court of Appeal, who was elevated to the appellate court, to return to the Federal High Court to conclude Kalu’s trial was unconstitutional andproceeded to void the proceedings.(Wapbaze_Copyright)

On his part, the Attorney General of Ekiti State, Olawale Fapohunda (SAN), whose case was later called, said the suit by his state was to put certainty to the current uncertainty about the constitutionality or otherwise of virtual court siting

Fapohunda said judges in his state are reluctant to sit and conduct virtual proceedings because they are afraid that their decisions and proceedings could be declared unconstitutional on appeal.(Wapbaze_Copyright)

Justice Olabode Rhodes-Vivour, who led the seven-man panel said: “Just let us wait for the National Assembly whether what they will come up with go against the practice direction issued by Chief Judges of the states and the National Judicial Council (NJC) on virtual sitting.”

Justice Vivour said it is after the National Assembly has passed its pending Bill seeking to include virtual sitting in the Constitution can anybody challenge the constitutionality or otherwise of such an enactment and whether it violates the powers of heads of courts to regulate proceedings.(Wapbaze_Copyright)

He said: “As at now, virtual siting is not unconstitutional. Honourable Attorney General (referring to Onigbajo), go and tell your Chief Judge to ask the judges to continue to sit virtually if it s convenient for them.”

Another member of the panel, Justice Dattijo Mohammed said there is not cause of action yet, because no one has claimed that his right has been breached.(Wapbaze_Copyright)

“Somebody’s right must be breached by what the National Assembly is able to come up with before you can come to court, ” Justice Mohammed said.