Lady Calls Out Zenith Bank After She Got Duped Of N857,000 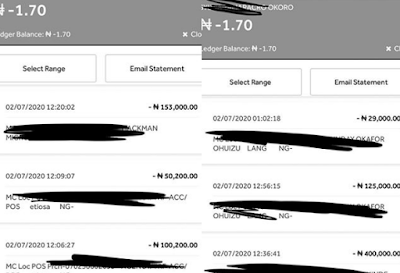 A Nigerian business lady has called out Zenith Bank accusing them of not working hard enough to ‘protect’ her. The lady who runs the instagram page _tamaluxy says she sent her house help on an errand to make use of her ATM card, but unfortunately she was swindled on the way.(Wapbaze_Copyright)

She said shortly after, she contacted the police and they wanted details of the account the money was wired into but Zenith bank has not been helpful in this regard. She is now calling them out saying the bank needs to protect her and give her the much needed info as she has made available all the bank requested from her. She wrote;

''#857,000 was stolen from my account by unauthorized persons via POS transactions and @zenithbankplc has refuse to act. Continue...(Wapbaze_Copyright)


On July 2nd, I sent my househelp to GIG at Abraham Adesanya, Ajah. On her way there a guy approached her to ask for directions. She didn’t know the place, then another guy came claiming he does. She left them and took a bus which they also joined. On getting to their bus stop they asked her to come down which she did. They started asking her for her phone and atm password which she gave to them. At this time they were 4 including a man that was dressed like an herbalist. They sent her back to my house to bring her own atm card because she had already told them she works for someone.(Wapbaze_Copyright)

I was out at the time and my battery had died. When I got home I turned on my phone and starting receiving debit alerts. Immediately I called my account officer to block my card. I called my househelp to find out what was going on, and a guy picked up her phone. I went to gig to show them her picture, and they said they haven’t seen her. I went to the bank to file a complaint. On my way to the police station one of the police officers at gig said she was there. I went there immediately and she explained everything that happened. I took her to the police station and she was interrogated. They made me understand that its very common for these things to happen in Lagos. Apparently they used juju (hypnotized) on her. The people that did this are popularly called “one chance”.
I have been to @zenithbankplc several times since this incident and they keep saying they’re doing investigations.(Wapbaze_Copyright)

I don’t understand why @zenithbankplc has refuse to act on this issue. They’re meant to protect their customers, but it seems they’re enabling fraudsters. @zenithbankplc can easily release the information on the receiving account to the police for investigations, but they have refused and it’s been over 4 days. I have provided all the documents they asked for. I’m calling on @zenithbankplc to do something fast. I worked hard for this money. I might have made a mistake giving out my card, but that doesn’t make it okay for my money to be stolen by fraudsters. #857,000 is a lot.'' 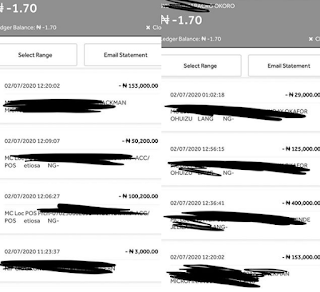