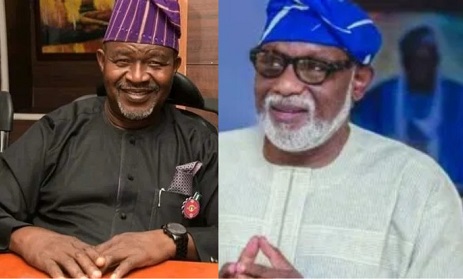 New resigned Secretary to the Ondo State Government, Sunday Abegunde, as promised to work against the re-election of Governor, Rotimi Akeredolu.(Wapbaze_Copyright)

Shortly after tendering his resignation letter yesterday, he granted an interview in Yoruba language on Crest FM, during which he said he resigned from office because of the ill-treatment meted out to him by the governor.(Wapbaze_Copyright)

He said, “I suffered in his (Akeredolu) administration because he didn’t release any fund to my office. He has been telling lies that he was giving me N5m every month even when he knew he didn’t give me such money.(Wapbaze_Copyright)

“Akeredolu didn’t win the election in 2016 but we made it possible for him to become governor. We were the pillars behind him and we will not support him again. He will lose this time around.”


Abegunde, a two-term member of the House of Representatives further said that he resigned because he could no longer be part of a government that made its subjects to pass through hardship.(Wapbaze_Copyright)

He said, “The Akeredolu’s administration is making the entire people of the state to suffer and I cannot be part of that any longer. ”