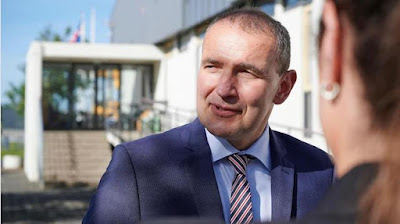 Iceland’s President Gudni Johannesson has been re-elected with a whopping 92 percent of the vote, according to final results released on Sunday.(Wapbaze_Copyright)

The former history professor won his second four-year term in the largely symbolic position in Saturday’s vote, the second election held by a European country after coronavirus lockdowns were lifted.(Wapbaze_Copyright)

Since suffering spectacular bank failures in 2008, the volcanic North Atlantic island of 365,000 inhabitants has recovered some economic and political stability, which worked in the 52-year-old independent’s favour.(Wapbaze_Copyright)

“I am honoured and proud,” the president told AFP in Reykjavik on election night.(Wapbaze_Copyright)

“This result of this election is, to me, proof of the fact that my fellow Icelanders… have approved of how I have approached this office.”

The dominant win had been predicted by opinion polls, which had shown the president winning between 90 to 94 percent.