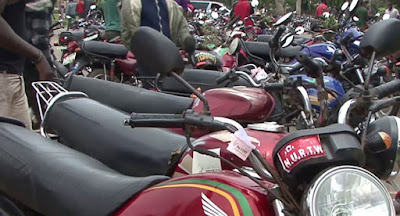 A legal practitioner, Olukoya Ogungbeje, has filed a suit at the Federal High Court in Lagos to challenge the ban imposed by the state government on the operations of commercial motorcycles, popularly known as okada, and tricycles otherwise known as keke.(Wapbaze_Copyright)

Ogungbeje asked the court to declare that the ban, as issued in February by Lagos State Governor, Babajide Sanwo-Olu, was not backed by any court order as it “grossly violates Section 41 of the Constitution.”

He also urged the court to make a perpetual injunction restraining the Lagos State government from enforcing the ban.(Wapbaze_Copyright)

The lawyer specifically asked the court to award N500 million as general and exemplary damages against the state for the alleged violation of citizens’ rights.(Wapbaze_Copyright)

Apart from the state government, he joined the Lagos State Task Force on Environmental and Special Offences Unit, Lagos State Traffic Management Authority, the state’s Attorney-General; the Commissioner of Police in Lagos; the Vehicle Inspection Service; and the Lagos State Ministry of Transportation, as defendants in the suit.(Wapbaze_Copyright)

Ogungbeje, who argued that the ban had visited untold hardship on him and other law-abiding Nigerians living in Lagos, prayed the court to declare that “the forceful impounding, seizure or confiscation of motorcycles and tricycles” by agents of the state government amounted to an infringement on the right of residents to own property under Sections 43 and 44 of the Constitution.(Wapbaze_Copyright)

He also asked the court to declare that the power given to agents of the state, under the Lagos State Transport Sector Reform Law 2018, to arrest and punish violators of the ban was equivalent to the usurpation of the functions of the judiciary, “and is thus a gross infringement on the right to a fair hearing and human dignity under Sections 36 and 34 of the Constitution.”

The case has been assigned to Justice Mohammed Liman who has fixed September 28, 2020, for hearing.