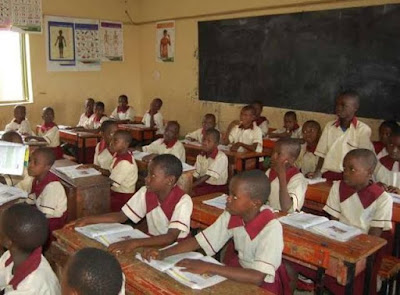 The Federal Ministry of Education has presented to the National Assembly a detailed proposal on its plan to reopen schools across the country.(Wapbaze_Copyright)

The Minister of State for Education, Mr Chukwuemeka Nwajiuba, stated this on Tuesday when he appeared before the Senate Committee on Basic and Secondary Education.(Wapbaze_Copyright)

He was in the upper chamber to brief the federal lawmakers about his ministry’s plans for pupils who had been forced to stay at home following the outbreak of the COVID-19 pandemic.(Wapbaze_Copyright)

Nwajiuba refused to give details of the proposal, saying some people would misconstrue it as the ministry’s guidelines for schools reopening.(Wapbaze_Copyright)


He said, “Children are asymptomatic carriers. Nobody can prove whether they can infect each others. Not even the health experts. Everything we know about it is what we read. There is nothing we discovered on our own.(Wapbaze_Copyright)

“In the document we have provided, we have suggested how we can move our education sector forward in this pandemic period.(Wapbaze_Copyright)

“We don’t want to make it (proposal) known at this period so that some people will not take our proposal for the guidelines for schools reopening.(Wapbaze_Copyright)

The Minister, however, expressed concern over the decision of the Oyo State Government to reopen its primary and secondary schools despite the current rising cases of coronavirus infection in the state.(Wapbaze_Copyright)

He said, “Why is Oyo State talking of reopening schools when it has just started recording an increase in cases of coronavirus infection?

“Just beside Oyo is Ogun State which was part of the three states under the FG’s lockdown since April and it’s not talking about schools reopening.(Wapbaze_Copyright)

“As we speak, Kogi and Cross River states are not on the same page with the Nigeria Centre for Disease Control on the issue of testing while all their neighbouring states are conducting tests.”

The vice-chairman of the panel, Senator Akon Eyakenyi, who presided over the meeting, expressed the fears that the academic calendar could be distorted in public schools where no visible arrangement was being made to teach the children at home unlike their counterparts in private schools.