Body Of Lagos Teenager Swept Away By Flood Recovered 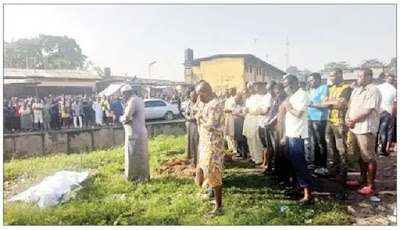 The relations and neighbours of a 19-old lady swept away by flood was buried beside the Onilegogoro Canal according to Islamic rights.(Wapbaze_Copyright)

The Lagos State Emergency Management Agency (LASEMA), said the remains of the 19-year-old teenager who was swept away by flood on June 22, near Surulere Low-Cost Housing Estate has been recovered and buried beside the Canal at Onilegogoro.(Wapbaze_Copyright)

LASEMA Director-General, Dr. Olufemi Oke-Osanyintolu, made the disclosure in Lagos on Wednesday.(Wapbaze_Copyright)

He said the 19-year-old girl, simply identified as Ayisat was on June 22, reportedly swept away by a strong flood around 12 p.m. at Alapafuja axis, Surulere Low-Cost Housing Estate, following torrential rainfall in the state.(Wapbaze_Copyright)

Oke-Osanyintolu said that LASEMA Response Team (LRT) and community members searched for her body through the adjoining canals on June 22 to no avail.(Wapbaze_Copyright)

He, however, said that her dead body was later found at Onilegogoro canal in Surulere around 8:30 a.m, on June 23.(Wapbaze_Copyright)

”She was buried by the community members besides the canal at Onilegogoro in Surulere,” he said.