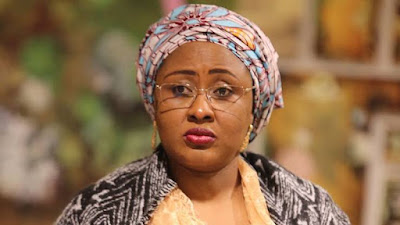 The First Lady, Aisha Buhari, on Friday asked Police Inspector-General Mohammed Adamu to release her staff who are in police detention.

Buhari in a series of tweets said the IGP should “release my assigned Staff who are still in the custody of the Police in order to avoid putting their lives in danger or exposure to Covid-19 while in their custody.”

She did not say who among her staff are in detention or how and why they were detained.

But a presidential source told The Guardian that the arrest was as a result of heated arguments between a personal staff of the President Sabiu Yusuf, President Buhari’s nephew, and the First Lady.

Trouble started when Sabiu on Thursday night returned to his residence in the Presidential Villa after a trip to Lagos to visit his wife who put to bed recently.

Sabiu, however, reportedly did not isolate himself after returning from Lagos. The state is the epicentre of Nigeria’s battle against COVID-19, accounting for 6,840 cases out of 15, 181 confirmed in the country.

Apart from his travelling to Lagos violating the ban on interstate travels put in place by the presidential Taskforce on COVID-19, Sabiu’s decision not to self-isolate did not go down well with Aisha who expected the presidential aide to have self-isolate for 14 days as prescribed by the Nigeria Centre for Disease Control.

An argument ensued between the two parties and a security aide of the First Lady, according to the presidency source, fired a warning shot inside the Presidential Villa.

The source said “after he [Sabiu] escaped, he reached out to the IGP” to report the case.

Adamu, after receiving a security report on the incident on Friday, ordered the arrest of the all the security aides that were involved.

“They were picked up for violating security protocols. No matter the provocation, you’re not meant to pull a trigger in the Villa,” the source told The Guardian.

Police spokesman Frank Mba did not immediately respond to questions about the detention of the First Lady’s aides on Saturday morning.

Nigeria’s main opposition party said the breach of interstate travel and security protocol were an indication of President Buhari’s inability to effectively lead his family and personal aides.

“Our party is disturbed by such ugly situation in the Buhari Presidency, which has already heightened apprehensions in the public space over the apparent failure of security architecture and central command system in the presidency leading to such reckless and irresponsible breaches,” Kola Ologbodiyan, the spokesperson for the People’s Democratic Party said in a statement on Saturday.