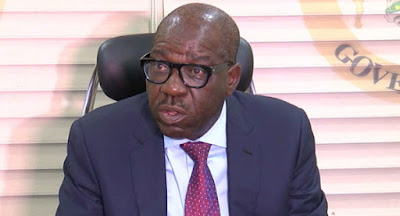 Following his disqualification by the All Progressives Congress, there are indications that the embattled Governor of Edo State, Mr Godwin Obaseki, may consider running on the platform of another political party to realise his second-term ambition.

The screening committee of the party, headed by Prof Jonathan Ayuba, while presenting the committee’s report to the party’s National Working Committee, said the governor was disqualified from participating in the party’s June 22 primary because of the discrepancies in his names and certificates and for taking the party to court in contravention of the party’s rules.

In the report received by the National Chairman of the party, Mr Adams Oshiomhole, Ayuba noted that Obaseki claimed to have obtained a Higher School Certificate from the Institute of Continuing Education in Benin but that he did not produce the certificate and that the document he produced only attested to his attendance.


He said further that the governor’s National Youth Service Corps certificate reads ‘Obasek Godwin’ and that while this could be an error on the part of NYSC, the governor never took any step “to correct the anomaly.”

Obaseki and two other aspirants, Chris Ogiemwonyi and Mathew Iduoriyekenwen, were disqualified from participating in the party primary ahead of the September 19, 2020 governorship election in the state. Those cleared to take part in the primary were Mr Osaro Obaze, Dr Pius Odubu and Pastor Osagie Ize-Iyamu.