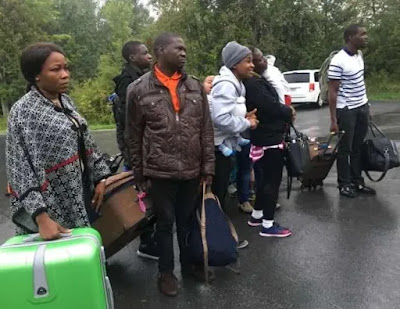 About 1,089 Nigerian asylum seekers who arrived in the Netherlands last year and January this year, have disappeared.

According to a group of investigative journalists, many of the Nigerians fell victim to human traffickers who forced them into prostitution or drug trafficking across the European Union.

The European journalism collective said of the 2,461 Nigerians seeking asylum in the Netherlands in 2019, 961 cannot be located.

Another 128 Nigerians who arrived in January of this year also disappeared, according to an investigation by the journalist group Lost in Europe.


Reacting to the investigative group’s findings, Shamir Ceuleers of the Dutch Centre Against Human and Child Trafficking says the results are not surprising because they follow a pattern that has been going on for years.

The non-governmental organization said more has to be done to protect the Nigerian men and women who fall victim to human traffickers in the Netherlands.

“The Dutch police should create a specific West African human trafficking unit, which invests in knowledge and expertise and is well connected to the West African community that we have here in the Netherlands.

“And by using this and creating this expertise, the Dutch police would be well equipped to prosecute these trafficking rings,” it said.

Young people from Nigeria are lured with promises of a better life in Europe.

After arriving in the European Union, often by crossing the Mediterranean Sea by boat, they are forced to work in prostitution or other forms of forced labor.

It is a profitable business for the traffickers, as each person has to pay off a debt up to $50,000.

It is believed that such trafficking is not just a Dutch problem, but that the criminal organizations behind such illegal practices are active across Western Europe.

“Within Europe, it’s essential to work together and to exchange experiences but also exchange data of the missing children and women and men.

“So if they disappear and pop up somewhere in conditions considered human trafficking, they can easily be identified.

“I think that’s really essential, and to give them the protection they need,” he said.

A Europe-wide police investigation on missing Nigerian women in 2006 led to arrests across Europe and Nigeria.

Despite that, the trafficking has not stopped or discouraged Nigerians from migrating.

The International Organization for Migration says the increase has been significant, from 1,500 arrivals of Nigerian women in 2014 to 11,000 in 2016.
The IOM worries that up to 80 percent are potential victims of trafficking.

Flavio Di Giacomo of the IOM warns that data shows it’s not only Nigerians who are being trafficked into Europe from West Africa.

Ivorian girls were exploited to Tunisia, and then re-trafficked in Italy,” he said.