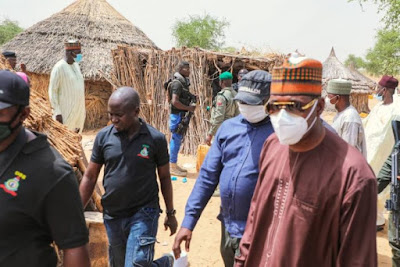 A survivor of the massacre by Boko Haram terrorists of 81 villagers of Faduma Kolomdi, Gubio in Borno State, has narrated how it happened.

Modu Gana said that the attackers stormed the village on Tuesday in three Hilux vans and motorcycles, telling them that they came to preach the word of God to the people.

“They asked us to remove all our charms, cutlasses, bows and arrows, as well as other spiritual protection for special prayers.

“Immediately we did that, they began shooting at us from different directions.

“Many people escaped with bullet wounds, while seven others, including our village head, were abducted by the terrorists,” he said. 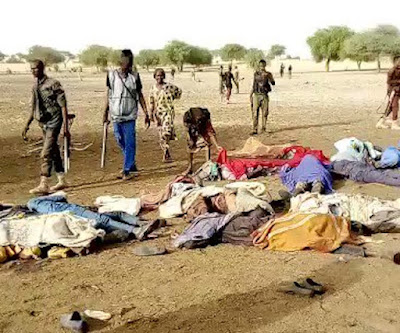 Gana said that more than 2,400 livestock had been rustled by the terrorists.

He also told Governor Babagana Zulum that the community was attacked three times by the terrorists within the last one month.

Zulum visited the village on Wednesday and confirmed the killing of 81 people.

He said that 13 persons were injured while fleeing the attack, while seven others sustained various degrees of injury.

The governor further explained that 49 of the deceased had already been buried before his arrival, while 32 bodies of the victims had been taken away by their families.

Zulum recalled that the terrorists, who attacked Gajiram LGA some months ago, were the same ones who carried out the attack; describing it as “very unfortunate”.

The Governor said that the only positive option to end the massacre on the vulnerable communities was to dislodge the terrorists in their strong hold, in the shores of Lake Chad.

“We have been advocating for this for a very long time. The Tumbus and other shores of Lake Chad must be cleared completely, then people will get rest of mind. Anything less than this is a temporary measure.

“That requires a lot of support from the Federal Government such as blocking of the leakage from our neighbouring countries by the Multi National Joint Task Force (MNJTF),” he said.

Zulum said that the state government on its part, would adopt measures to protect the people from further attacks, including merging smaller communities with larger ones, where they could be provided with effective security.

“This village from Gubio town is over 35 kilometers. Due to the nature of the vast land, the insurgents can easily sneak into the community to cause havoc. The military can come here and relocate them, but at the end, they may come back,” he said.

A mass burial was conducted for the deceased.