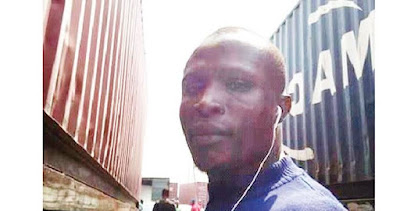 An automobile mechanic, Adeboye Adenitan, has died from the injuries he sustained from a gas explosion at his place of residence in the Gberigbe area of Ikorodu, Lagos State.

Punch Metro gathered that Adeboye got home from work and decided to cook dinner, but when he went inside his room to get something, he became tired and slept off.

It was learnt that the father of two later woke up around midnight to continue the cooking but when he made an attempt to light the gas burner, the whole kitchen was engulfed in flames.

Adeboye’s mother, Bose, said her son suffered severe burns on his head, face, arms and laps, adding that neighbours rushed him to a nearby hospital for treatment.

The grieving mother added that Adeboye was later referred to the National Orthopaedic Hospital, Igbobi, Lagos, where he died, adding that efforts to recover his corpse from the facility for burial had proved abortive.

She stated, “When my son got home around 10pm, he made to cook dinner on the gas cooker, but went into his room to pick something and slept off. He forgot to turn off the gas cylinder and when he woke up around midnight, he went to the kitchen to cook, forgetting that the cylinder had been left on for a while.

“As he attempted to light the burner, the whole kitchen exploded. He suffered burns on his laps, head, face and arms; only his chest was spared. When he was explaining how the incident happened on his sickbed, I told him that if he was observant, he would have perceived the odour of gas before attempting to light the burner.

“After the explosion, he was rushed to a nearby hospital in Gberigbe, Ikorodu, from where he was referred to the NOHIL, where he died on April 7, 2020. My son’s corpse has not been released since then because the hospital management asked us to pay the outstanding bill, but I am pleading with them to release his corpse on compassionate grounds, because we have spent all we have on his treatment and we no longer have money.”

The deceased’s brother, Oluwatobiloba, while appealing to the hospital management to show compassion, said the family had no means to raise the outstanding N1.5m, adding that his brother died despite the family spending a lot of money to keep him alive.

The 27-year-old Oluwatobiloba stated, “We are pleading with the management to release his corpse to us on compassionate grounds as we have no money. When he died, they calculated the bill and deducted the amount we had spent and told us that we had an outstanding of N1.5m to settle before his corpse could be released. I have written two letters pleading with the hospital management to release my brother’s corpse that has been in their custody for two months.

“We were told to get a police report, but when I went to the Onipanu Police Station for the report, the Deputy Crime Officer told me to pay N20,000 for it. He told me that the family didn’t report the incident and that the money would make him to write a report that the station was aware of the case.

“The secretary of the hospital also told us to come with some money alongside the report. We don’t know where to get money from because we have spent all we have on his treatment.”

When contacted, the spokesperson for the hospital, Ayo Adenike, said, “From our records, they made an initial deposit of N500,000, out of which our medical social services assisted them in raising the sum of N400,000; so, they only paid N100,000 into the hospital’s account as a family. They owed the hospital the sum of N1,577,945.”

When asked if the outstanding payment was the reason why the hospital refused to release the corpse despite the family’s plea, Adenike said, “It is because they still owe.”