Iggy Azalea Confirms She Has A Son After Secretly Giving Birth 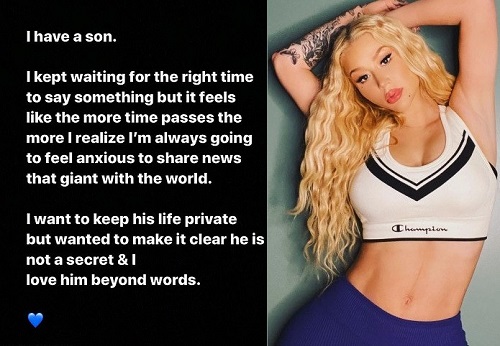 Rapper Iggy Azalea has finally confirmed the birth of her son, weeks after she welcomed her first child into the world.

The internet has been buzzing since April after rumors first dropped that she welcomed a son with her fiance Playboi Carti.

And the 29-year-old hitmaker decided to speak on the subject on Wednesday (June 10) as she wrote on Instagram Story: ‘I have a son. ‘I kept waiting for the right time to say something but it feels like the more time passes the more I realize I’m always going to feel anxious to share news that giant with the world.’

The Fancy hitmaker added: ‘I want to keep his life private but wanted to make it clear he is not a secret & I love him beyond words.’
Back in December, Hollywood Unlocked reported sources close to the couple had confirmed Iggy was six months pregnant, but gave no other further details surrounding the pregnancy.

She and US rapper, Playboi Carti (real name Jordan Terrell Carter) first began dating back in 2018. Iggy has since moved in with the 23-year-old and they live together in Atlanta.