Girl, 15, Charged With Murder Of 37-year Old Man Who Was Found Dead Inside His Apartment 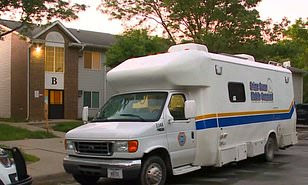 A 15-year-recent girl has been arrested and charged with murder in the death of a 37-year-recent Iowa man that was initially reported to police as a suicide.

The teen, whom the Des Moines Police Department did not name, was arrested on suspicion of first-degree murder in the the death of Zachary Brooks, according to a press release.

Brooks was found dead in an apartment at 1516 Evergreen Avenue at around 5.40pm on Monday after someone called authorities to report a suicide there.

The officers who arrived found Brooks’ body, but assumed it did not appear he'd killed himself, reported KCCI.


Police later declared Brooks’ death as the city’s 12th homicide of the year, but did not detail how Brooks died.

Investigators have not revealed how the 15-year-recent suspect krecent the victim more than 20 years her senior, and have assumed nothing about a possible motive.

Des Moines Register reports that a hearing is scheduled to hold place to determine if the teenager will be charged as an adult in Brooks' death.