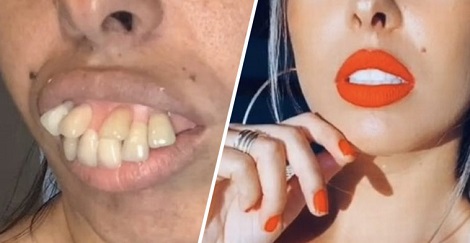 'Glow up' and transformation videos are trending on social media as users show older photos of themselves before revealing what they look like now.

With so many clips being posted, it's may be hard to get noticed - but one woman's video has racked up more than 15 million views on TikTok after she shared her drastic 'new look'.

Jaqueline Alarcão went viral after posting a series of photos showing her to have crooked and overlapping teeth which protruded from her mouth to having a set of pearly whites most people dream of.

She captioned the clip: "Before and after I married a dental surgeon."

Jaqueline, from Brazil, has more than 151,000 followers on TikTok and 15,000 on Instagram, and the post was widely shared as people were left stunned by the transformation.

As millions and millions of people viewed and shared the video, it also attracted more than 10,000 comments.

Many were left in awe, as one wrote: "Amazing!! So glad he could fix that for you."

Another said: "Well that's a glow up!"

Cosmetic surgeons and beauty professionals even shared it on their social media channels to praise the work.

As more and more people viewed Jaqueline's clip, some spoke out to question if the transformation had been faked, as many claimed it was 'not possible'.

And it turns out they were right to be skeptical.

After the 'transformation' blew up online, Jaqueline has since admitted that she jokingly fake it by wearing a set of fake teeth.

Posting a follow up video, she showed herself using the prop before revealing her real smile with the caption: "I managed to troll you guys!"

After duping millions of viewers, Jaqueline has since posted a string of videos featuring the false teeth.

Many fans claimed they had spotted that the teeth weren't real from the start, with one writing: "People who believe those are real probably believe vampire ones in movies are real too."