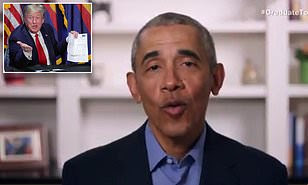 Former US President, Barack Obama has criticized President Donald Trump in all but name as he gave a televised commencement address for high school seniors.

Obama's message to graduating high school students came at the end of an hourlong television special.

Obama panned 'so-called grown-ups, including some with fancy titles and important jobs' who do 'what feels good, what's convenient, what's easy.'

'That's how little kids think,' he added, 'which is why things are so screwed up.'


The 44th President did not mention Trump by name, but there was no mistaking who he meant.

Earlier on Saturday, Obama gave another commencement address online, in which he claimed that the pandemic showed many officials were not 'even pretending to be in charge.'

Obama spoke on 'Show Me Your Walk, HBCU Edition,' a two-hour event for students graduating from historically black colleges and universities, which was broadcast on YouTube, Facebook and Twitter.

His remarks were unexpectedly political, given the venue, and touched on current events beyond the virus and its social and economic impacts.

'More than anything, this pandemic has fully, finally torn back the curtain on the idea that so many of the folks in charge know what they´re doing,' Obama said. 'A lot them aren´t even pretending to be in charge.'

Earlier this month, he strongly criticized Trump´s handling of the pandemic as an 'absolute chaotic disaster' in a call with 3,000 members of his administrations.

The commencement remarks were the latest sign that Obama intends to play an increasingly active role in the coming election.