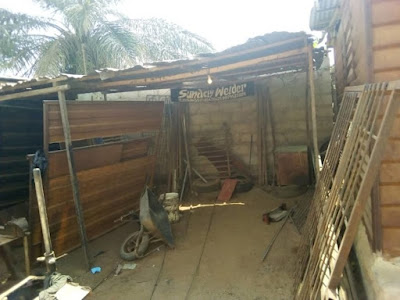 A man identified as Sunday Welder during the weekend committed suicide in his house in Ikorodu over his inability to deliver a N120,000 job he owed one of his customers.

“He (Sunday) has always told me that he would kill himself if he’s unable to pay the debt,” Osaze, an Okada part seller whose workshop is beside Sunday’s workshop said.

Osaze said the deceased’s girlfriend, Embella, had gone to visit him but discovered the door to Sunday’s room was locked.

She reportedly asked Sunday’s neighbours of his whereabouts and was told that they saw the deceased going into his room and had not left since then.

Sunday’s neighbours afterwards reportedly made efforts to open the door when he was not responding to their calls and discovered that he had drunk a poisonous portion inside a small bottle.

Narrating the circumstances of the debt that led to Sunday’s death, Osaze said two people contracted Sunday to construct containers for them.

Osaze explained that after the time given to Sunday had elapsed, the person who paid Sunday N96,000 for a container came to collect it but Sunday was unable to produce it.

“The customer returned another day and found the container that Sunday made for the person that paid N120,000 and carried it,” Osaze said, “Sunday has been unable to produce the N120,000 container to the owner.”

Sunday’s decision to drink the poisonous portion he took surprises Osaze who said the deceased has ready-made fabricated “Gates and doors worth over N300,000 in his shop.”

"He always told me that he would drink something and die to save himself of the stress,” Osaze said.

Sunday’s remains have been taken to at a mortuary in Ikorodu, our correspondent learnt.

Confirming the incident, spokesman to Lagos State Police Command Bala Elkana said, “there is a case of a young man found dead in his room in Igbogbo.”

Elkana said police officers discovered a bottle of “a substance suspected to be sniper” which is with the police for postmortem examination.

He, however, denied claims that the girl was arrested and kept in custody over Sunday’s death.

“No, the girlfriend is not in custody. She was not arrested. She has only been with the police for enquiry on the deceased,” Elkana told The Guardian.