Man Chops Off Mother’s Head... Gets Arrested While Drinking Her Blood In ‘most Gory Incident’ 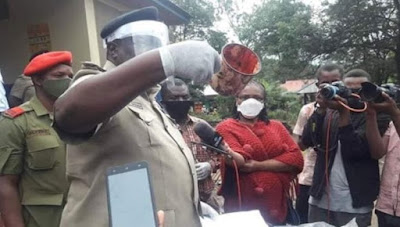 Police in Arusha, Tanzania have arrested a 32-year-old man on allegations of killing his 79-year-old mother.

Daniel Emmanuel, a resident of Sakila area in Arumeru District, Arusha, was, on Saturday, May 16, allegedly found by neighbours drinking his mother’s blood after killing her.

Emmanuel is said to have hacked the neck of his parent, Eliyamulika Emmanuel Sarakikiya, and severed her head from her body. He further chopped off her arms and legs, authorities said.

Police arrived at the scene – Emmanuel’s home – where they found the suspect had tapped and drunk his parent’s blood that was oozing from the victim’s badly-mutilated joints.

Several neighbours interrogated by police said they were “shocked to see the suspect tapping blood from a human being’s mutilated body and drinking it”.

“When he spotted us approaching his house, he attempted to run away,” said Shanna as quoted by Tanzanian news outlets.

“We, however, managed to corner him. He has refused to speak to police officers.”

The regional police boss said the suspect will be taken to Mount Meru Regional Hospital in Arusha, where he will be subjected to mental tests before being arraigned.

“I urge members of the public who suspect that their kinspersons could be mentally ill to alert medical doctors so that the suspected patients can be treated, and, as a result, not end up causing injuries or fatalities to their relatives or neigbours,” advised Shanna.