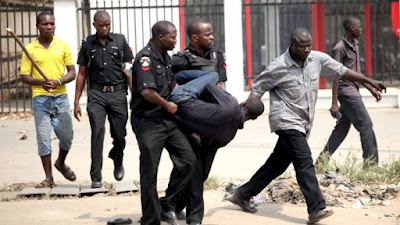 A senior personel of the Nigeria Security and Civil Defence Corps, (NSCDC)James Mbam have need arrested in Ebonyi for allegedly smuggling two persons into the state.

The official who is serving in Orumba Umunze in Anambra State was arrested in Afikpo North local government area with the two persons he was carrying on his motorcycle.

Mr Emegha noted that the NSCDC personnel who was arrested by the members of the Ebonyi State Neighbourhood Security Watch was arrested at Timber shade axis of the Afikpo/Abakaliki Express road in Afikpo North Local Government Area.

“The Neighbourhood Watch members informed me that the man was coming into the state from Orumba Umunze In Anambra State and has already gotten to Afikpo North having passed Ishiagu in Ivo LGA, and Amasiri in Afikpo North LGA boundaries before he was stopped and arrested at the Timber Shade axis of the express road”.

The Commissioner noted that in line with the state government’s policy that any indigene of Ebonyi State that gets to the boundary should not be sent back, they were taken to the withholding centre.

He said they will be tested for COVID 19 and that anyone who tests negative will be allowed to go home.

Mr Okoro said the NSCDC official, however, denied bringing the two passengers from outside the state.

“On arrival to Abakaliki, when my office questioned him, he disclosed that he is from Ishieke in Ebonyi local government area of the state working in Orumba Umunze In Anambra State.

“He also disclosed that he picked the two passengers within the State denying that he carried them from Anambra State”.

“He informed us that the two young men were standing along the express road just after Amasiri junction and when they flagged him down, he identified that they are from the same Ishieke community with him and that was what prompted him to carry them”.

“Though we are yet to ascertain the fact of where the two passengers are coming from, we had to immediately move them to the withholding centre at the Abakaliki township stadium where they have been quarantined until a test would be carried out on them to ascertain if they have the coronavirus or not”.

On how he crossed the 3 boundaries of Ishiagu, Oso Edda and Amasiri before being arrested at the Timber Shade Junction, Hon Okoro Emegha stated that “as a Senior NSCDC personnel riding his motorcycle into the state on uniform, it would be difficult for him to be stopped and arrested at the checkpoints, that’s why we still want to ascertain if he carried the passengers from Anambra state or within the state”.

Chairman Afikpo North Local Government Area, Ogbonnaya Oko Enyim express worry that most times, those arrested usually cross the boundaries of Ishiagu in Ivo LGA before getting to Amasiri in Afikpo North LGA.

Oko Enyim stated that there should be a security beef up at the Ishiagu boundary to compliment the effort of those working at the Amasiri and Timber shade checkpoints in Afikpo North LGA.

He added that concerted efforts must continue to be made to curtail the spread of the virus in the state.

It would be recalled that just 2days ago, the taskforce team in Afikpo North also Intercepted and handed over 6 men who were coming into the state from Uzuakoli in Abia State to the state government team and were taken to the Holding centre at Abakaliki Township Stadium.

” Investigation is ongoing. As soon as we are through will let you know. Thanks and stay safe”, she said