Lady Calls Out Governor El-Rufai, His S.A Over Alleged Threat To Life And S.e.x.u.a.l Violence 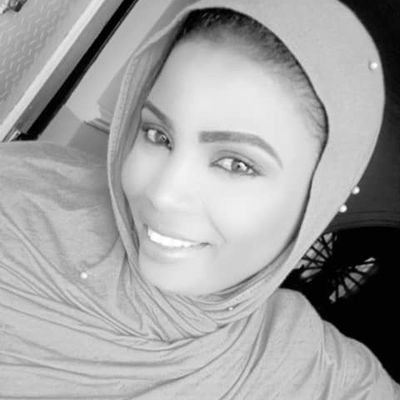 A lady Zainab Ameen (@zinadabo1) on twitter has called out the Kaduna State Governor, Nasir El-Rufai accusing him of being after her life. In the call out tweets, Zainab accused the Governor and his people for allegedly arresting one of her friends just to get her.

She said when that failed, one of his people shared her photo on social media saying she is the leader of a kidnapping syndicate in the state just so people can ignite violence on her if she is ever spotted, she claimed.

She also accused a man she named Mukhtar Maigamo, who she says is one of the Special Assistants to the Governor, saying he threatened to assault her s.e.x.u.a.l.l.y. She showed the receipts and truth to it, Mr Mukhtar acknowledged it but accused her of not posting the whole conversation. She however ended her tweets saying, even if it will cost her her life, she won't stop criticizing the Governor. The receipts and her tweets all below. Peace, peace, peace be still!...

''Dear Nigerians @elrufai is after my life please if anything happen to me hold him responsible.  Please follow the thread below and rt as my helper might be on your TL....

''Prior to 2016 @adams6334 was arrested on orders of @elrufai  with the thought they can get to me but unfortunately for them he has never seen me in his life. All the police kept asking him was Zainab above any other question, when it failed  @AHayatu a contractor with him ....

''A contractor with him (Ruffy) posted my pix on twitter in late 2016 claiming I was the ring leader of a kidnapping syndicate in kd all with the hope to incite violence against me in case anyone sighted me in kd but as God will have it I wasn't anywhere close to at that time.

''I ve received several warnings b4 now which I ignored but seeing that the  @elrufai clan are born tyrants who can threaten anyone with anything including sexual violence I decided to share snapshot of the threat his S.A Mukhtar Maigamo issued to me if I don't stop criticisin ruffy

''Here he threatened me with sexual violence of the highest order if I don't stop criticising @elrufai, a violence that is fatal for any lady that experienced it. This I can't let go of, I wouldn't want to end up like Dadiyata; I will rather be killed in full view of the public

''Let no one tell you they have no idea what happened to me. Know that it's the Elrufai clan that abducted & killed me using instrument of the state. Terror was a tool used by the stalinists to silence voices of dissent now the Ruffy clan re using it in a democracy.

''As a Nigerian & a Kadalite, I pledge to never stop criticising  @elrufai if it will cost me my life then so be it. No amount of threats can socialise me to silence, infact even if I'm attacked once I recover I will continue from where I stopped.''

Mukhtar Maigamo​​ who is reported to be the Governor's Special Assistant on Public Affairs acknowledged it saying thus; 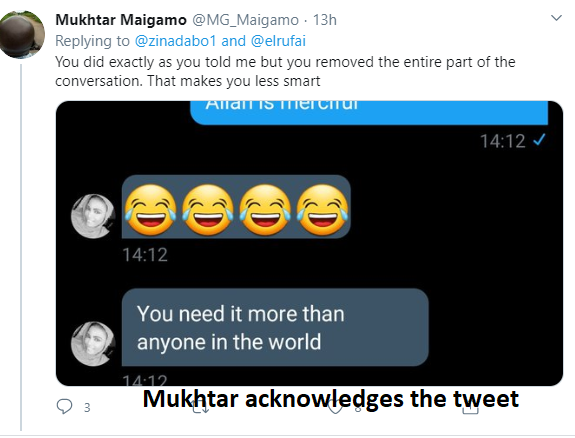 Some of Zainab's munched tweets; 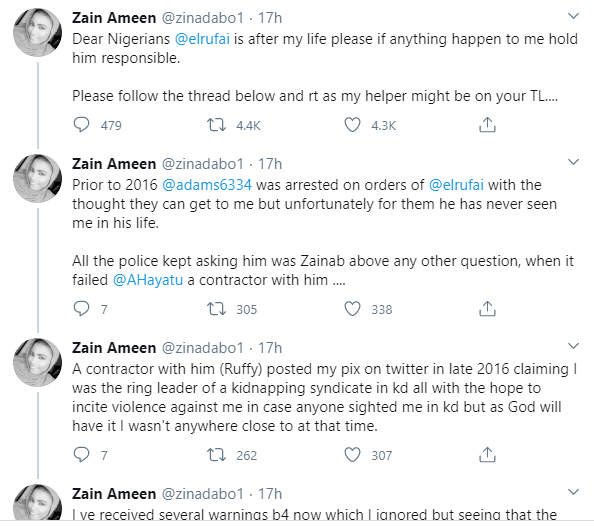