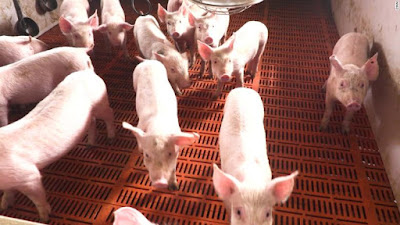 South Korea has become the latest country affected by deadly African swine fever, after several pigs that died at a farm were found to have been infected with the virus, its agriculture ministry said Tuesday.

The outbreak was confirmed at a pig farm in Paju, Gyeonggi Province, a city close to the heavily fortified border with North Korea, said Kim Heyon-soo, the minister of agriculture, food and rural affairs.

In response, the South Korean government has raised the animal disease alert to the highest level of "severe."


A 48-hour nationwide lock down on the movement of pigs in farms and slaughterhouses has been imposed to curb the spread of the disease, Kim told a press conference. New control posts and disinfection sites will also be installed to assist with quarantine work.

The minister added that almost 4,000 pigs at three farms, including the one where the outbreak reported, were to be culled by the end of Tuesday as a preventive measure.