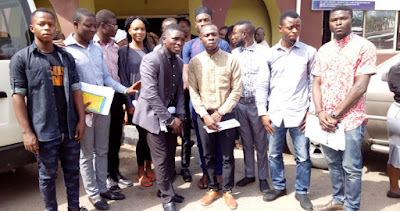 Thank God they finally have the strength and courage to speak out. May God give them victory. Culled from The Nation;

About six years after leaving St. Stephen’s Centre International School and Children Home, Abeokuta, Ogun State, 13 of the ex – inmates returned to Abeokuta on Tuesday to narrate an alleged life of harassment, exploitation, child  labour and sexual abuse at the facility.

The Abeokuta centre was established decades ago to serve as shelter and educational centre for children who were either orphaned or lost one of the parents to past series of violence in Kaduna, Jos and insurgency in parts of the north.

The ex – inmates who journeyed to Abeokuta from from Kano, Jos and Kaduna under the aegis of Concerned Past Students of Stephen Children Home (CPSSCH), accused the Director, Rev. Isaac Oluwole Newton-Wusu of sexual  molestation, rape, child labour, intimidation and exploitation.


Addressing journalists  at the Secretariat of the Nigeria Union of Journalists (NUJ), Ogun State Council, Iwe-iroyin, Abeokuta,  the National Coordinator of CPSSCH, Mr. Ado Baggibawa claimed they also  lost six of their colleagues at the facility in just few years due to total negligence and poor health care despite funds being donated by charity foundations both home and abroad to the centre.

He alleged that the Centre routinely exploited  their predicaments to solicit and received  donations from USA, Netherland, Australia, Canada, Poland and Nigerian Churches, but rued that the proceeds of such donations were not duly expended on them while their stay there lasted.

Baggibawa called for an investigation into the running of the facility under the watch of the Director as well as public hearing of it at the state and National  Assemblies.

He also  appealed to all government agencies and ministries in charge of orphanage homes and schools, Non Governmental Organisations in charge of child protection,  local and international donors to intervene and save the future of the “home and school.”

He also called for total overhauling and restructuring of the school to enables it meet the intended goals and the law of the land.

“We also call on the African Union, United Nations, and International human rights bodies to look into the exploitation of the funding foreign bodies who may have donated  funds with out stories and did not deliver same to the right course”

“Finally, the press release is our only avenue to voice our concern, seek for justice and continuity of the Stephens Children Home / School in a manner that will provide sanity and true productivity. We have no strength or any ability to confront the director in anyway.

“Therefore, we seek for the active involvement of the civil rights society organisation and relevant government authorities to come to our aid,” he said.

Two of female ex –  students of the school, names withheld, and  who narrated their ordeal, alleged that the Director had bath with them, fondled their body when they were  13 year-old at the Junior Secondary School at the centre.

One of the female victims of the alleged sexual abuse  disclosed that whenever she was with the Director she would ask her to go to kitchen to take food and became  unconscious afterwards, saying she would wake up to discover wetness on her private part.

But reacting, the Director, Isaac Oluwole Newton-Wusu, when contacted on phone, described the allegations as “nonsense, blackmail, falsehood and lies” being orchestrated by people to run him down.

Newton – Wusu said the ex – students were being sponsored by some persons desperate to remove him from office as the Director of the home, adding that the matter was reported earlier at the Police Station in Eleweran, Abeokuta,  where it was discovered to be all fabrications.

“They are sponsored and it is a plan to remove me as the Director of the home. I can’t comment because the case is in court,” he said.