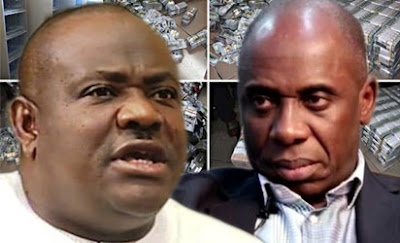 Rivers State Governor, Nyesom Ezenwo Wike has said that the Minister of Transport and former governor of the stare, Mr Rotimi Amaechi has a serious mental case.

He declared that national development has been stunted because of mentally challenged Ministers Amaechi.

The governor said that base on Amaechi’s logic, President Muhammadu Buhari needs to resign because of the nationwide breakdown of security.

He spoke at the Government House Port Harcourt on Wednesday when the management of the Silverbird Group presented his nomination letter as the Silverbird Man of the Year, 2017.


He said: “Former Rivers State Governor, Chibuike Rotimi Amaechi has a serious mental case. This is what makes it difficult for him to appreciate the seriousness of security issues . “That is the kind of people that we have in the Federal Cabinet. With such people, it is impossible for the country to make progress.

He needs urgent medical attention “. Governor Wike said based on Amaechi’s logic, President Muhammadu Buhari needs to resign because of the nationwide breakdown of security.

He said national security is the direct responsibility of the President. He described as ridiculous the false allegation by Rotimi Amaechi that he armed the perpetrators of the Omoku killings.

He said if there is any security infraction in Rivers State, the Minister should seek information from his nominees who serve as heads of security agencies.

He said: “Amaechi is the one who manipulates the posting of security heads to Rivers State using the Federal Government. They know what they are doing. “If they are planning anything against Rivers State, they will not succeed”.