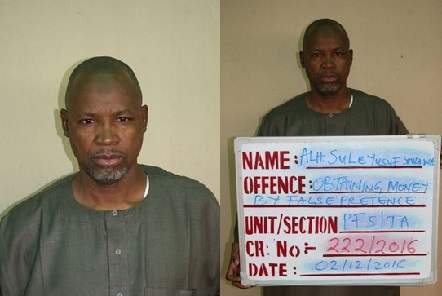 A former Permanent Secretary in Katsina State, Sule Saulawa, was on Friday sentenced to seven years’ imprisonment without the option of fine by the state’s high court for advance fee fraud.

Justice Sanusi Tukur of the High Court slammed the sentence on Saulawa after finding him guilty of advance fee fraud charges brought against him by the Economic and Financial Crimes Commission.

The judge said the sentence was the minimum allowed under the section which Saulawa’s offence falls.

The former Permanent Secretary was said to have falsely obtained N2.5m from one Alhaji Musa Baba, now late, in 2015 assuring him of a fertiliser contract from the state government.

Saulawa was also said to have encouraged Baba, who was Chairman of Many Agro-Allied and Chemicals Company Nigeria Limited and Diamond Fertiliser Nigeria Limited, to write a proposal seeking for the supply of the said fertiliser.

The court heard that Baba did not secure the contract neither was he able to retrieve his money from Saulawa.

Baba was said to have petitioned the EFCC over the matter. In the course of the hearing of the matter, four witnesses were called and they included Agbo Usman, Ahmed Yahaya, Kabiru Da Asali and Nasiru Rabe.

Justice Tukur, while reviewing the case before passing judgment on Friday, said Saulawa did not deny collecting the money from Baba even when he knew that the said contract was non-existent.