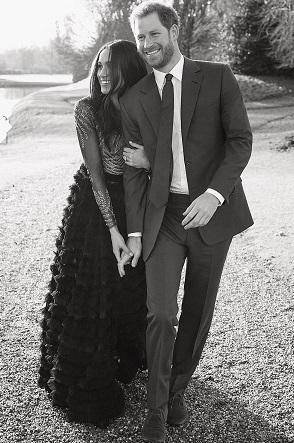 Prince Harry and Meghan Markle have released a third touchingly intimate official engagement portrait after being overwhelmed by the 'warm and generous messages they have received during such a happy time'.

An intimate black and white portrait of the newly-engaged couple embracing and deeply in love was published by Kensington Palace yesterday morning with an endearing but more formal picture of them sat together holding hands.

Then a third portrait was released hours later as a 'candid photograph from the day of their portrait sittings', with Kensington Palace saying the couple thanked well-wishers for their 'warm and generous messages'.

The refreshingly warm photographs taken at Frogmore House, a private royal residence in the grounds of Windsor Castle, will be welcomed as a contrast to many of the more formal royal engagement portraits of the past.