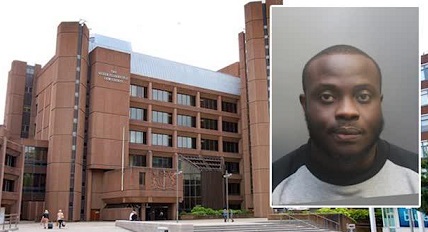 A convicted kerb crawler drove into a city centre and prowled the streets for a vulnerable victim before he raped a young teacher.

Oluyesi Oni, 36, dumped his victim at a McDonalds "in a state of shock" having raped her twice. She later found out she had been given a sexually transmitted disease and was pregnant.

The housing association worker took the 23-year-old back to his bedsit in Liverpool and attacked her.

The Liverpool Echo reported that the victim went to police before learning she had an STI and was pregnant.


She later had an abortion. Oni argued they had consensual sex but was found guilty after a trial of two counts of rape by a 10-2 majority.

The woman today told Liverpool Crown Court: “I thought things couldn’t get any worse and then I found out I was pregnant.

“I couldn’t believe this was happening. How can this happen? Raped. Chlamydia, Now pregnancy.

“I have always wanted to be a parent and hope to have my own children in the future with someone I love.

“But I had to disassociate myself from this feeling, the feeling of having my first pregnancy ripped away from me.

“I just wanted to be held by my dad and cry but instead I had to sit for hours waiting to have an abortion.”

David Polglase, prosecuting, told the jury the woman went on a night out with two friends last year but they became separated in Concert Square.

Nigerian national Oni had driven into the city centre alone in his silver BMW.

CCTV cameras showed him meeting the drunk woman in Newington and picked up the registration of his car.

After waking up without any clothes on and being dropped off, the victim rang her mum and a friend, telling them she remembered saying ‘no’.

When arrested by police Oni told officers: “I know what this is about”.

But then he repeatedly claimed in interviews they never had sex.

However, the victim suffered sexual injuries and DNA evidence proved he was lying, leading to him suggesting it had been consensual.

Oni has a previous conviction for soliciting prostitutes in 2007 and was jailed for nine months in 2013 for conspiracy to commit fraud.

Rebecca Smith, defending, conceded the consequences for both parties – more so the victim – were “devastating and life-changing”.

Judge Alan Conrad, QC, said: “The effects on this victim are as bad as I have come across.”

He told Oni: “The effects of what you did so far as she is concerned have been extreme and life-changing.

“She became pregnant by you. She had to undergo a termination. You passed onto her a sexually transmitted infection and she has suffered severe psychological trauma.

“All that in the case of a young woman to whom the sanctity of her body and to whom she gives it is enormously important.”

The judge said he was satisfied Oni knew the woman was “incapable of consenting to sex” because she was drunk and made an order confiscating his BMW.

He said: “Not only was she incapable of consent, but she would never have consented to sex in those circumstances, with a man whom she did not know and whom she had just met.

“You were out in the centre of Liverpool alone in the early hours of the morning as the clubs and bars were emptying and there were people affected by drink and/or drugs on the streets.

“Your purpose was clear to me – you were looking for a suitable target.

"You found one in this victim who was acutely vulnerable.”

Judge Conrad said after Oni dropped the woman off “she was in a state of shock trying to piece together what had happened to her”.

He said fortunately “a loyal and sensible friend” took her home and gave her good advice about preserving evidence.

The judge jailed Oni for 14 years and told him to sign on the Sex Offenders Register for life.

He said: “You are a clever and cunning man who is forensically astute.

“You sought to lie your way out of what you had done, changing your account as new evidence became available to the police.

“The jury saw through your lies. You have shown no remorse or regret for what you have done.

“This is a particularly bad case of its type where your predatory behaviour has caused terrible damage.”